Clondalkin RFC was founded in 1973 at a time when it was felt that the game should be brought to and developed in this rapidly expanding area of Dublin. As such with all undertakings, the beginning was modest. The first game was played against Old Kilcullen RFC. This outing confirmed that the potential existed for a first class Rugby Football Club in Clondalkin, so the Club was formed and affiliated to the Leinster Branch and the project was underway.

From 1973 until the middle of the 1977/78 season, the Club had its home in Moyle Park College, courtesy of the Marist Brothers. On this ground all of the development of the playing side of the Club took place. In this period, the playing standard progressed from Junior VI level to Junior III level and the number of team fielded increased from one to three XV’s. During this period also playing at the juvenile level was undertaken and developed.

With the foundations well laid and the roots well established, the Club Committee felt it was time to take the next crucial step in the Club’s development, that was to acquire a permanent home and to establish a Club spirit as well as a team spirit. The enormity of this undertaking was well appreciated by members who contributed handsomely out of their own pockets to establish a fund for purchase of land suitable to the requirements when such came on the market. Local industry and business was approached and asked to contribute also and their response was magnificent. 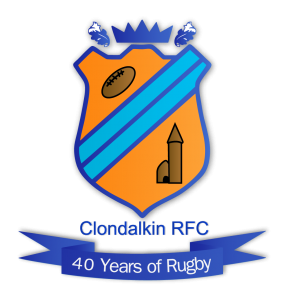 In 1977, the grounds at Kingswood were purchased for the princely sum of £27,000 and the work of building and development was begun in earnest. Since then, the Club has steadily progressed and by 1985/86, the Club was promoted to Junior II level. Fast forward to season 2013/14, the Club’s 40th Anniversary year, Clondalkin RFC are now a Junior I Club, playing in the highest League in Leinster – League Division 1A. We field 4 adult men’s teams every weekend, a women’s team and boast a thriving mini and youth rugby section.