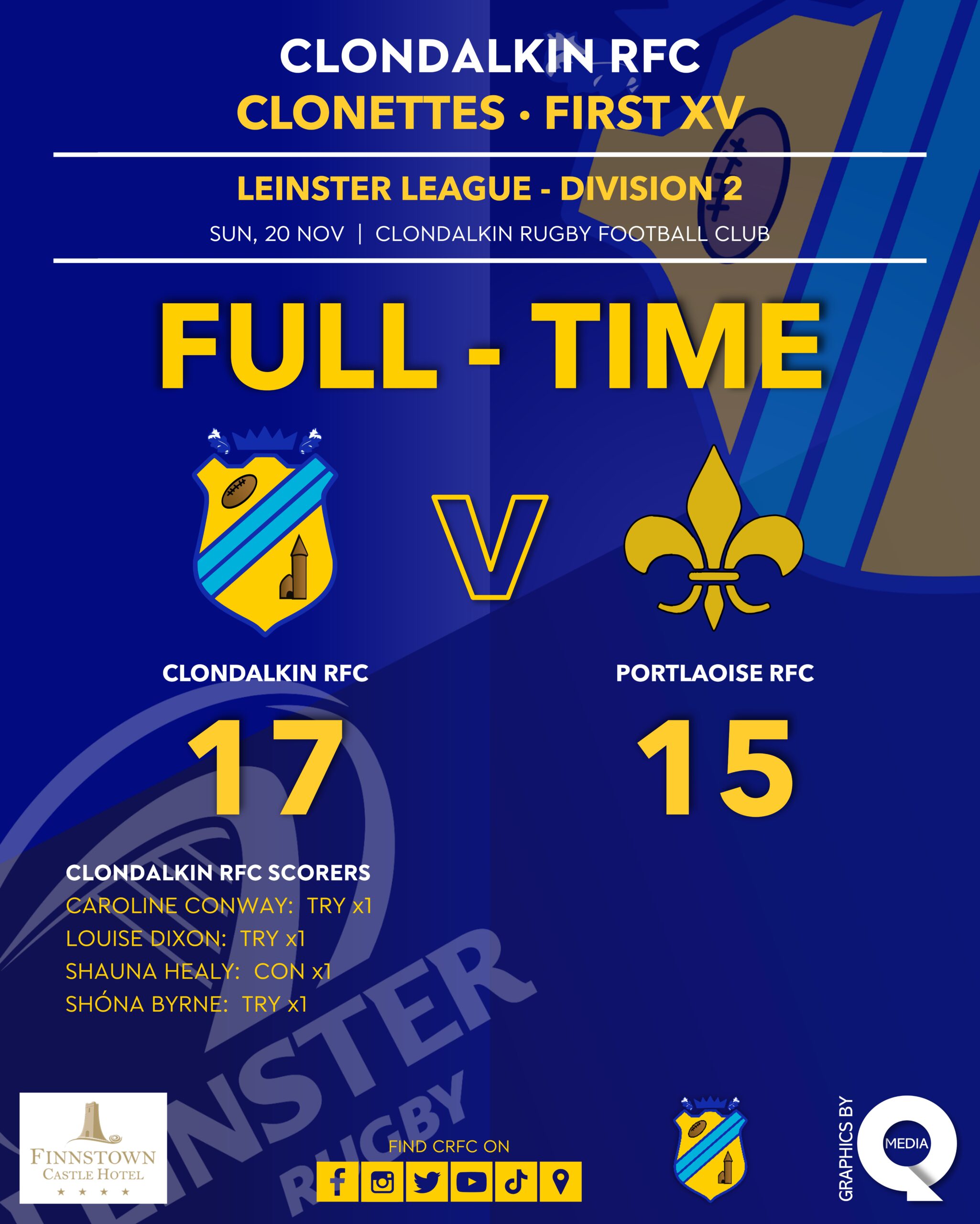 While some results have not gone their way, we were very wary that Portlaoise are a traditionally strong and direct team. We worked hard on removing the “taking it for granted” mentality in the preparation for this game. However, we did see it as an opportunity to rotate our squad.

In the first half, Clon had more territory but the possession was about 50:50. Errors and penalties prevented Clon from converting their territorial advantage into scores.

From the restart, there were a number of errors that allowed Portlaoise to get into the Clon 22 for the first time. Clon turned the ball over and attempted to shift the ball wide but a lack of communication resulted in a knock on and a turnover. A couple of phases later and Port scored on the right side, leaving the score level at 5-5.

Clon attempted to raise the tempo again but were prevented from doing so. Finally, in the run up to half time we were successful. The Port defence looked to be defending their line successfully when a quick pick and go resulted in Clon’s 2nd try by Caroline Conway. The conversion was a difficult one but Shauna “Parish” O’Connor slotted it through the posts. That ended the half at 12-5.

A number of substitutions at half time were made and the message was simple, play with tempo. Yet again this was going to be prevented.

A great break by Parish released Shóna Byrne. Unfortunately the support couldn’t get there in time and Shó was caught before the goal line and Port were able to clear their lines.

The game then settled into a repetition of the 1st half, stop-start. When Clon attempted to pass the ball wide, Nikki Smyth was isolated, penalised for holding on and yellow carded after the referee gave a team warning for persistent holding on at the break down. A few phases and penalties later, Port scored on the right again to bring it to 12-10.

The half continued to be frustrating for both sides. After Clon returned to 15, they were reduced to 14 almost immediately when Niamh Farrelly was yellow carded for an offence that wasn’t explained. This turned out to be detrimental for Port as Shó moved into 9, and at the next scrum she broke down the blindside and scored on the right again, bringing it to 17-10 with 10 minutes to play.

Port received a yellow for a high tackle and then Clon received a 3rd yellow on the day reducing the team to 13.

Clon had one more chance after another line break from Parish, followed by a line break by Hannah Ryan. Clon attempted to shift the ball wide on the left but the pass went to ground and the Port right wing responded quickly, played some soccer down the wing and landed on the ball over the line to make it 17-15 with a conversion still to come. Unfortunately for Portlaoise and fortunately for Clon the conversion was missed and Clon won 17-15.

Although there could have been a feeling of deflation after only getting 4 points, that would be unfair and disrespectful towards Portlaoise and the battle they put into the game.

Some performances of note include the great scrummaging and lineout lifting by Sarah and Hannah Ryan, some excellent ball carrying by Shauna Healy, the defence by the whole back row of Niamh McD, Ellen King and Naomi Fynes. In the backs, we had some great defence from Parish, Nikki Smyth and Caoimhe Peggs. Finally, the control, management and all round play by our captain Ciara Meenagh. And finally Caz Conway’s 1st try after 11 years.

It was a competitive game where both sides attempted to play rugby. It was very much a stop/start game with little opportunity for the game to settle. Certainly some of the blame for that lay at the feet of the players, but not all of it. However, we will continue to focus on the variables we can control and ignore everything else. 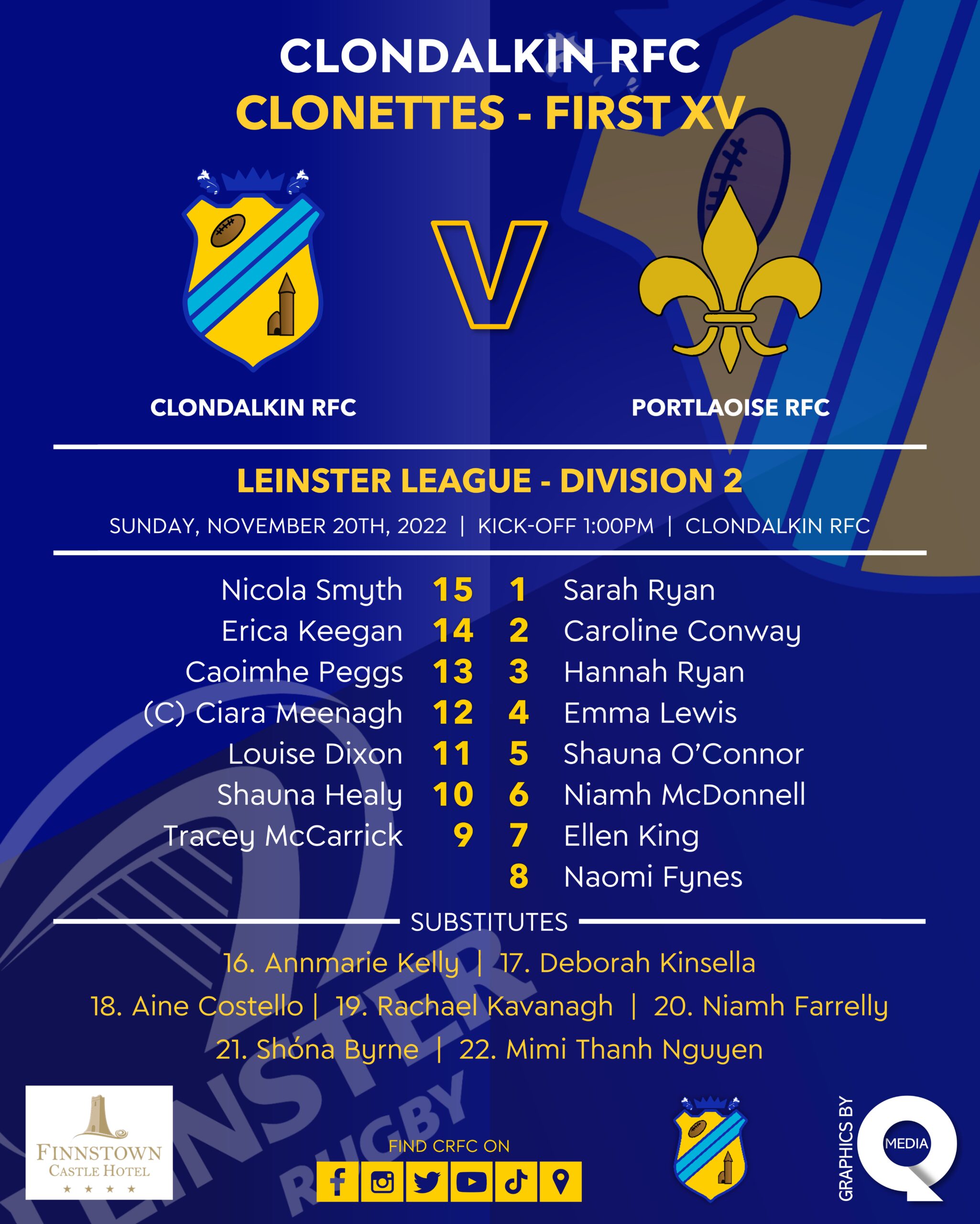