St Kevin’s secondary school, Neilstown, have started rugby for the first time ever. It was a natural occurrence once a New Zealander was appointed to their teaching staff. Phil Sommers who has I.R.F.U. coaching badges already has begun coaching his junior team in preparation of the South Dublin cup after Christmas. The school have linked up with Clondalkin Rugby Club and will use the club for home games. The club hope that this will lead to the influx of players over the coming years as the school develops within the rugby world. The school is a known football school with great success but there is a demand for rugby.

The boys appear to be very keen and pictured above are Phil Sommers who will coach the team receiving rugby balls and equipment from President of Clondalkin RFC Alan Bracken.

Alan is delighted that rugby is spreading throughout Clondalkin and with the club currently sitting in 2nd place in Leinster League 1b, the future of the sport in Clondalkin is certainly bright. 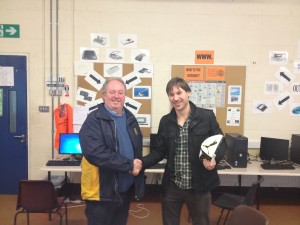